Two burglars, including member of London crime gang, on the run after escaping jail 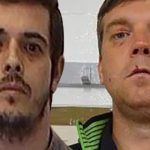 
Burglars, including a member of a South London crime gang, have jumped a security fence to escape from jail.

A manhunt has been launched for the pair after they escaped from a prison carrying rucksacks and a towel.

Sam Hawkins and Darren McKay managed to get over the fence at HMP Sudbury in Derbyshire earlier this week.

They even managed to escape with their luggage. One was seen carrying two bags and the other holding a single rucksack with a towel around his neck.

MyLondon’s brilliant new newsletter The 12 is packed with news, views, features and opinion from across the city.

Every day we’ll send you a free email at around 12pm with 12 stories to keep you entertained, informed and uplifted. It’s the perfect lunchtime read.

The MyLondon team tells London stories for Londoners. Our 45 journalists cover all the news you need – from City Hall to your local streets.

Never miss a moment by signing up to The 12 newsletter here.

The burglars were caught on camera making their escape at 10.15pm on Monday, October 11.

Later on they were spotted hiking down the A515 heading towards Ashbourne.

Police are urging people not to approach the dangerous duo if they are spotted.

Hawkins, 34, was jailed in 2019 for burglary, theft and driving offences.

He was part of a South London gang that ended up being jailed for nearly 50 years after committing a series of ram raids across the capital.

Hawkins is described as being 5ft 7ins, with brown hair, brown eyes and of medium build.

He has links to the Bexley Heath, Plumstead and Thamesmead areas of London.

The other man on the loose is McKay, 37, who is described as being around 6ft 2ins tall, with blue eyes, brown hair and is of stocky build with tattoos on his arms.

He was convicted for burglary and driving offences last year and has links to Luton and Harpenden.

HMP Sudbury is an open prison in Derbyshire that was holding 480 men before the pair escaped.

This year, at least a dozen men have escaped from HMP Sudbury, which holds about 600 men – most of whom are at the end of their sentences.

More than 1,500 men have absconded the prison since 1996, according to a report by the Derbyshire Telegraph.

One prisoner was absconding every five days at the height of the escapes from the prison, the newspaper adds.

He added: “But it tends normally to be some kind of family crisis or some kind of relationship difficulty rather than being an attempt to escape prison and escape justice.”

Want more from MyLondon? Sign up to our daily newsletters for all the latest and greatest from across London here.