The beautiful uninhabited island technically in the UK despite being 9,000 miles from London 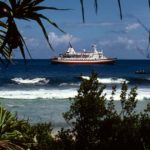 
Britain has dozens of Overseas Territories as a direct result of colonisation dating back centuries.

They are the last remnants of the former British Empire so do not form part of the United Kingdom itself, but retain Queen Elizabeth II as their monarch.

One such island is Henderson Island which lies in the middle of the Pacific Ocean – more than 9,000 miles away from London.

READ MORE: The pretty seaside town 2 hours from London that’s one of the most in demand property spots in the country

Nestled halfway between Chile and New Zealand in the South Pacific is the uninhabited coral atoll of Henderson Island.

According to National Geographic, it is about as far away from anywhere and anyone on Earth.

Spanning just over 14 square miles, it’s home to beautiful white sandy beaches and atmospheric cliffs, but you would be unable to enjoy them if you were allowed to go on holiday there.

Rubbish from Russia, the USA, Europe, South America and Asia all wind up here at a rate which some experts predict is about 3,000 items a day due to the pattern of the currents in this part of the Pacific.

Much of it consists of fishing nets and floats, water bottles and helmets.

Jennifer Lavers, co-author of a new study of this 38-million-piece accumulation, told the Associated Press she found the quantity “truly alarming.”

She said: “Although alarming, these values underestimate the true amount of debris, because items buried 10cm below the surface and particles less than 2mm and debris along cliff areas and rocky coastlines could not be sampled”, Lavers and a colleague wrote in Proceedings of the National Academy of Sciences – a scientific journal.

In 1902, it was annexed to the Pitcairn Islands colony, which is now a British Overseas Territory.

Henderson is one of the last two raised coral atolls in the world whose ecosystems remain relatively unaffected by human contact.

While the island is now uninhabited, this has not always been the case.

Polynesians are known to have arrived on the island some time around the 11th century, but they abandoned the island after centuries due to the limited amounts of crops and resources on the island.

It has poor soil and little fresh water, making it unsuitable for agriculture.

According to the organisation: “As one of the last near-pristine limestone islands of significant size in the world, Henderson Island retains its exceptional natural beauty with its white, sandy beaches, limestone cliffs, and rich and almost undisturbed vegetation.

“With its vast numbers of breeding seabirds, the island is an outstanding example of a raised and forested oceanic coral atoll with its fundamental features intact.”

It is believed that a number of the plants and species which call the island home are “endemic” – meaning that they can not be found anywhere else in the planet.

Would you be brave enough to visit Henderson Island if you had the chance? Let us know in the comments.

Do you have any stories that you think we should be covering? Get in touch by contacting sam.ormiston@reachplc.com

Do you want the latest news in your area sent straight to your inbox? It only takes a few minutes! Click here.