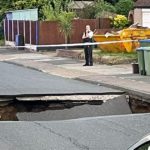 
Police officers have closed a road in Bexleyheath this evening, June 21, following reports of a large ‘sinkhole’ blocking the road.

At around 9.30pm emergency services, including police and fire crews, rushed to Martens Avenue, Bexleyheath.

Photographs taken at the scene show the sheer size of the ‘sinkhole’ which appears to span the entire width of the road.

A police cordon was errected around the damaged section of road and officers remained at the scene to protect members of the public.

It has yet to be confirmed whether any injuries have been reported as a reuslt of this evening’s incident.

Emergency services have been contacted for further information.