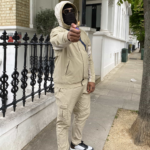 Liverpool is a city on the up when it comes to the UK drill scene, so it’s no surprise that there’s another fresh banger out of the city. Never Dat is new street anthem from Liverpool’s own Whatface.

Whatface comes with a laidback flow on this one but he’s still spitting absolute greeze. His vibe on Never Dat is like that friend you’ve got that’s calm and collected but you know they can switch it up with any provocation. The tune is paradoxically relaxed and tense at the same time.

Recorded at Fusions Studios, Never Dat was produced by KorenBeats, and mixed and mastered by LimitlessTheEngineer. The beat is cold and understated, adding to the dark atmosphere of the track.

Whatface flexes an impressive flow on this gritty track, as he showcases his lyrical and witty wordplay, staying true to his message and style.

Whatface is without doubt a name you need to keep an eye on right now. Never Dat only further solidifies him as one of the most exciting up and coming artists in the UK scene.