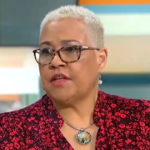 
Mina Smallman, the mum of murdered sisters Nicole Smallman and Bibaa Henry, gave her first TV interview today (November 25) where she called for Cressida Dick to resign as the Met’s chief and shared her fears that the ‘sick’ selfies taken with the bodies was a ‘fetish’.

She spoke to Susanna Reid and Ben Sheppard on Good Morning Britain (GMB) this morning, where she said how justice, in her view, is yet to be served.

As well as calling for Dame Cressida Dick to resign, she said she feared the photos of the bodies taken by Met police officers was part of a “fetish thing” where “people pay to have pictures of dead girls”.

Ms Smallman said that she “gets flashes” of images in her head and cries in her sleep often.

She said: “It’s part of the culture in the police force that you don’t grass on your team mates.”

She added: “For me, it’s a problem of most major institutions. And I’ve come from the church and there have been misdemeanours there. There’s a culture to paper up the cracks.”

She continued: “As soon as I heard that, I said, ‘This is not a one-off’. You don’t start breaching your position with this being your first move. This is going to be much bigger. We were told it had been sent out to members of the public.

“So at the point they were being investigated, they had sent it to a doctor and a dentist who were part of the WhatsApp group. And the IOPC went to them and investigated them. I was thinking, ‘Is this some sort of cult fetish thing’ where people are paying to have pictures of dead girls?”

She continued: “It’s like a three-part story that just got deeper and deeper in the depths of depravity.

“You go to London to make preparations for a funeral. You get a phone call saying that it was important.

“When they arrived that morning, we worried all morning.”

Hearing the news had taken her to the “depths of darkness”.

“How on earth could [they] do that? Until that point, I had never imagined what the girls’ dead bodies and now I get flashes of what they look like. I cry in my sleep.

“I think of it like the Jimmy Savile and the MeToo… if you are in the police force and you are sickened by what you’re seeing, come forward.”

Officers described them as ‘dead birds’

Bibaa Henry, 46, and Nicole Smallman, 27, were stabbed to death by Danyal Hussein, 19, at Fryent Country Park in Wembley on June 6 last year.

Her words come after police officers – PC Deniz Jaffer, 47, and PC Jamie Lewis, 33 – were sacked for taking pictures of the bodies, sharing them on WhatsApp, and calling them ‘dead birds.’

The pair were sent to guard the crime scene after the bodies of the two sisters were found.

Bibaa and Nicole had been celebrating Bibaa’s birthday when they were viciously stabbed multiple times by Danyal Hussein, 19.

He then dragged their bodies into bushes and left them with their limbs entwined in a deliberate act to defile them in death.

Bibaa’s boyfriend, Adam Stone, 35, discovered the sister’s bodies after he became concerned when she failed to return home to their pet bearded dragon.

Danyal, of Blackheath, was found guilty of the murders and was jailed for life with a minimum term of 35 years last month.

At the hearing, PC Helen Tierney said Jaffer and Lewis had left the cordon they were instructed to guard and took pictures of the bodies of the dead sisters, despite not having the “authority or a policing purpose to do so.”

She revealed how Lewis sent a WhatsApp message which read: “Unfortunately I’m sat next to two dead birds with stab wounds.”

Do you have a story you think we should be covering? If so, please email rafi.benady@reachplc.com

Want more from MyLondon? Sign up to our daily newsletters for all the latest and greatest from across London here.