I tried cottage pie from M&S, Tesco and Lidl and one was ridiculously disgusting – Lea Dzifa Seeberg 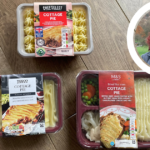 I always keep a home made one in the freezer for a rainy, cold day, ready to heat me up from the inside.

But I had no idea what cottage pies from different shops were like, so I headed off to find out.

READ MORE: ‘I compared Starbucks, Pret and Greggs pumpkin spiced lattes and the best one shocked me’

Finding them was easy enough – they don’t seem to be getting panic bought like so many other things as people wrongly think they’re not essential products.

As I was walking home from the shops, one of the dishes was already making me worried.

The cottage pie from Tesco weighed as much as the two others combined.

MyLondon’s brilliant new newsletter The 12 is packed with news, views, features and opinion from across the city.

Every day we’ll send you a free email at around 12pm with 12 stories to keep you entertained, informed and uplifted. It’s the perfect lunchtime read.

The MyLondon team tells London stories for Londoners. Our 45 journalists cover all the news you need – from City Hall to your local streets.

Never miss a moment by signing up to The 12 newsletter here.

It was so heavy that I carried it in one hand, and when I got home, my hand was in pain.

After applying some Ibuprofen gel and preheating my oven, I was ready for the tasting of my dreams.

So with no further ado, here’s how each cottage pie did.

This cottage pie cost me £3, so I was hoping it would be good.

It needed only 20 minutes’ cooking time, which was the shortest of the lot and pleased my hungry stomach.

And it came with sides of cheesy cauliflower and steamed vegetables.

The cottage pie itself was nicely seasoned and the mashed potatoes had a nice ripple effect on top, making it pretty appealing.

There was however not actually that much cottage pie, as half the pack was taken up by the sides.

The cheesy cauliflower did taste fantastic, but the vegetables were absolutely unforgiveable.

They managed to somehow taste metallic and plastic-y at the same time, and were so watery I didn’t need a drink with my meal.

The actual cottage pie was pleasant enough, but the vegetables angered me so much I’m docking a point off just for that.

This cottage pie was not even slightly humble.

It costs only £1.99, but made up for its reasonable price by needing a ridiculous 40 minutes in the oven. 40 minutes!

As I set the steaming dish on my table after waiting for a really long time (did I mention it took 40 minutes?), I was struck by how pretty it looked – the mashed potatoes looked like they were piped on by a loving grandmother rather than a robot in a factory somewhere.

My first bite was fantastic.

The mashed potatoes developed a crispy crust that made me really happy, and it tasted gorgeously buttery as well.

The meat itself needed a bit of salt, and there wasn’t that much of it, but I really didn’t mind based on how good the potatoes were.

Lidl cold have nabbed a full score, but the lack of salt robbed them of it.

This £2.80 cottage pie needed 25 minutes in the oven, so it sat in the mid range both on price and cooking time.

But it was way below on everything else.

It didn’t look particularly appealing when it came out of the oven, and it tasted even worse.

The heat turned the potato into a rubbery top layer that I needed a knife to get through.

As my partner so poetically put it, it was reminiscent of “dead foot skin”.

The little potato that I did manage to salvage tasted like raw potato.

And yes, I did follow the package instructions. I double checked.

The meat was completely liquid, and tasted like nothing but water.

It was genuinely like someone accidentally used water instead of salt.

M&S still did well even though it wasn’t perfect – better than some but worse than homemade.

Lack of salt seemed to be a common feature, but the Tesco cottage pie was the biggest shock ever.

I will never get the taste of watery meat out of my head.

Have a story you think we should cover? If so, email lea.seeberg@reachplc.com