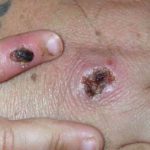 
Vaccines are to be offered to gay and bisexual who are at high risk of contracting monkeypox as national cases continue to rise with the current case number standing at 793. Monkeypox cases in London alone have soared to 498 and gay and bisexual men continue to be disproportionately affected by the virus, though it is not transmitted sexually and can be contracted by anyone.

The UK Health Security Agency (UKHSA) has sent out a recommendation that a vaccine used to treat smallpox, Imvanex, should be administered to those at high risk of contracting monkeypox as it has been found to be effective against the virus. The UKSHA said that “data from the latest outbreak shows higher levels of transmission within – but not exclusive to – the sexual networks of gay, bisexual and other men who have sex with men.”

The UKSHA shared that a clinician may advice vaccination for someone who, for instance: “Has multiple partners, participates in group sex or attends ‘sex on premises’ venues.”

Dr Mary Ramsay, head of immunisation at UKHSA, said: “Our extensive contact tracing work has helped to limit the spread of the monkeypox virus, but we are continuing to see a notable proportion of cases in gay, bisexual, and other men who have sex with men.

“By expanding the vaccine offer to those at higher risk, we hope to break chains of transmission and help contain the outbreak.

“Although most cases are mild, severe illnesses can occur in some people, so it is important we use the available vaccine to target groups where spread is ongoing.

“In the meantime, everyone should continue to be alert to any new spots, ulcers or blisters on any part of their body, particularly if they’ve had close contact with a new partner.

“If you think you have these symptoms, avoid close contact with others and call NHS 111 or your local sexual health centre, though please phone ahead before attending.”

Robbie de Santos, Director of Communications and External Affairs at Stonewall, said: “While we know anyone can catch monkeypox, we welcome the vaccine being offered to those gay and bi men who are eligible and currently at a higher risk of getting the virus.

“It is important that gay and bi men get the vaccine when offered to protect themselves and others. Let’s help get the outbreak under control so we can all have a safe and happy pride season.”

You should contact a sexual health clinic if you have a rash with blisters and you’ve been in close contact with someone who has or might have Monkeypox or if you’ve been to West or Central Africa in the past three weeks.

Chief Medical Officer Sir Michael McBride said: “The Public Health Agency has been working closely with Trusts and GPs to raise awareness of the disease and this move formalises that arrangement.”

Learn more about Monkeypox on the official Government website here.

Matt is a trainee reporter specialising in LGBT+ issues, including speaking to LGBTQ+ activist Peter Tatchell ahead of the 50th anniversary of Gay Pride in the UK, an interview with an ex-Lieutenant Commander who was forced to keep his sexuality a secret in the Armed Forces for 20 years who lost his partner to AIDS two days before he left the Navy, and speaking to the founder of The Gay Men’s Dance Company, which offers pole dancing classes, among others.

Got a story? You can reach Matt at matt.spivey@reachplc.com or DM him on Twitter via @mattlspivey.

Click here to sign up to our Daily Newsletter for the latest news and top stories from MyLondon sent straight to your inbox.